The California Avocado Commission provided its fiscal year 2020-21 marketing performance report, known as the Dashboard, to the Board of Directors in November. The report covers activity in the areas of consumer advertising, social media, consumer public relations, brand advocates, retail and foodservice programs, trade advertising and public relations as well as research highlights. Many of the key performance measures in the Dashboard report use “impressions,” a marketing metric used to quantify the potential views of an advertisement, article or webpage, hearing a radio/audio ad or interacting with a brand or product. In fiscal year 2020-21, California avocado marketing activity garnered more than 1 billion impressions and helped achieve brand awareness of 89% in California.

The consumer advertising campaign “the best avocados have California in them” continued and achieved more than 333 million impressions that also promoted California avocado availability at local retailers. Video advertising was a big part of the media plan, garnering more than 93 million views via digital streaming and 16 million video views on audio platforms.

The California avocado social media program on Facebook, Instagram, Twitter and Pinterest delivered more than 27 million impressions and 2.6 million engagements, with an additional 2.8 million impressions for social posts that also promoted California avocado availability at participating retailers. Another social platform, LinkedIn, targeted a business audience with nearly 1,000 followers and garnered about 500,000 impressions with an active engagement rate of 4%.

California Avocado Month also was celebrated with a local drive-in event where media, influencers and consumers enjoyed the classic family film, Angels in the Outfield. More than 76 million impressions were garnered through local media coverage of the event and via inclusion of California avocado recipes developed for the event by chef E Dubble in a nationally distributed mat release.

CAC’s Living Well Brand Advocates program worked with six health and wellness influencers including four registered dietitians. This program, which was detailed in the fall 2021 edition of From the Grove (pages 23-24), garnered 3 million digital and traditional media activations.

More details and examples will be included in the winter edition of From the Grove. 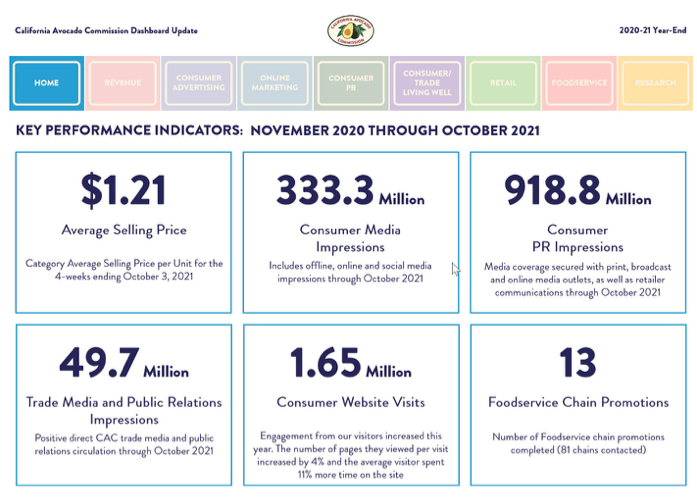 It’s back-to-school time and from August 15 through the end of the month the...

The California Avocado Commission celebrated the 10th Anniversary of California...