On Friday July 6, 2018, the California avocado industry was hit by an unprecedented heatwave. For many growing areas the heat continued into July 7 and July 8. What made this event so different from previous heatwaves? First, it had been a very mild season up to this point — some growers reported that their groves were in the 70s on July 5 and hit with triple digit temperatures on July 6. Second, this event hit the entire industry; there were very few groves that escaped damage.

What Happens to an Avocado Tree During a Heatwave?

Under normal conditions, an avocado tree is extracting water from the soil through its roots, which moves through the tree and exits through leaf pores known as stomates. Stomates can open and close to regulate the flow of water vapor out of a plant and the entry of carbon dioxide for photosynthesis. The opening and closing of stomates is driven by plant hydration, temperature, relative humidity and wind. The loss of water from a plant’s leaves through the stomates acts as an evaporative cooler, maintaining leaf temperature close to that of air temperature.

The purpose of closing leaf stomates under high temperature and/or low humidity is to slow the movement of water from the soil, through the plant, to the atmosphere. If this “flow” is too rapid, the water column — which is under very high tension — can snap, resulting in the formation of an air bubble (embolism) in the water conducting tissue (xylem) of the plant. These air bubbles are nearly irreversible and can lead to permanent damage to the plant.

Avocados evolved in a very moderate climate. As a result, they are poorly adapted to the high temperatures and low humidity that is common in California. Research conducted in the mid-1990s at the University of California, Riverside (UCR), looked at the leaf function of avocados in Irvine at the South Coast Research and Extension Center and on the UCR campus. What they found is that trees that grew in a hotter average climate (UCR campus) were better adapted to high temperatures, but photosynthesis drop off and stomates closed during the afternoon in both locations. Their data show that avocado stomates begin to close when air temperatures rise above about 88 °F.

During a heatwave, the avocado tree’s response is to close its stomates to prevent excess water loss and the development of embolisms. This results in leaf temperature increasing because the evaporative cooling has been reduced. Under extreme conditions like we saw on July 6, the leaves and small stems of the tree will overheat and literally cook. The rapid onset of this heatwave meant that the trees had virtually no acclimation to the high temperatures.

Young trees were severely damaged or even killed in this heatwave. The greater space between young trees, compared with mature trees, allowed the heat to fully surround the trees, exposing them to high temperatures from all sides. Young trees also have less mass and smaller diameter branches. As a result, they have less water content relative to surface area and heat up much more quickly than large trees. Lastly, young trees simply don’t have the extensive root system and reserves to weather an event like this and likely closed their stomates sooner than a more mature tree. Mature trees and trees about four years old and older tended to fare much better than the young trees. Damage to the mature trees was primarily across the top of the canopy and on exposed sides of the trees.

As leaves wilted from the heat, they exposed fruit and branches that were previously shaded. This resulted in sunburn damage to small and, in some cases, large branches. These damaged branches may sprout in time, but without some intervention they will never be healthy, fully functional branches in the tree canopy.

Fruit suffered both direct and indirect damage from this heatwave. Mature fruit exposed to heat can become very hot. At the recent Brainstorming meeting in South Africa, a Chilean consultant showed a picture, taken with a thermal imaging camera, of a bin of fruit — half of the bin was shaded and half was not. The shaded fruit had a surface temperature of about 75 °F, whereas the exposed fruit had a surface temperature approaching 110 °F — and this was not under heatwave conditions! Current season fruit on the trees during this recent heatwave softened and became unmarketable. There also is some evidence that a heatwave like this can cause changes in the composition of the various oils in the avocado, resulting in decreased fruit quality.

Young fruit for next season, like a young tree, have very little mass and heat up very quickly. These fruit reached at least ambient temperature all the way to the center of their developing seed, and may have even exceeded ambient temperatures. As a result, the fruit became soft, their developing seed shriveled, and they are no longer viable. In addition, many of these young fruit were severely sunburned as the surrounding leaves wilted and exposed them to direct sunlight.

Many growers have probably heard the analogy: treat it like a freeze, wait and see. While this is true, there are some nuances missing in this analogy. Following a freeze, it is difficult to know the full extent of the damage and where the dead tissue ends and live tissue starts. Thus, the common advice is to wait until the tree begins to regrow, indicating where the living tissue is, and then prune back to this new growth. In the case of a freeze, this usually takes several months since we’re not in an active period of growth for the tree. And that is the big difference — our trees want to grow now!

In most cases, trees damaged by the heatwave are already sprouting and showing you where the living tissue is. Once this new growth appears, it is safe to come in and prune the dead and damaged wood from the tree. However, sunburn protection is critical!!! Remember, you will be pruning these trees in the middle of summer and they will require protection to prevent more damage. It is very important to pay attention to the weather forecasts and use your best judgement before pruning. If another hot spell is coming, it would be best to wait until temperatures return to more normal levels. Hopefully, by late August or early September the danger of high heat events will be past and it will generally be safe to prune.

Whitewash must be applied the day of pruning — it takes only a very brief exposure to full, mid-day sun for previously shaded branches to burn. Some growers prefer to whitewash their trees prior to pruning. They do this to prevent the whitewash from coating the pruning wound and inhibiting the normal wound healing response of the tree. If using this approach, be sure that all exposed branches are protected after the pruning is complete, and apply additional whitewash if needed. Typical whitewash is a diluted latex paint — use 1-part paint to 1-part water up to 1-part paint and 3-parts water — but some growers, particularly those who are certified organic, prefer to use a natural kaolin clay product (e.g., Surround®).

For young trees, those less than about 3 years old where most of the canopy was damaged, the goal should be to get leaves back on the trees before the end of this season. These trees are unlikely to bloom in the spring for a 2020 crop. Once these trees are growing, prune away the dead and damaged branches and whitewash the tree. Be judicious with your water and fertilizer application. Remember, the leaf area on these trees has been drastically reduced and thus, so has their water need. Hand fertilizing with a good quality water-soluble complete fertilizer, rather than fertigation, would be a good way to nurse trees through recovery. This will allow you to tailor the amount of fertilizer applied to each tree based on its level of damage and regrowth.

For larger trees (about 4 years old and older) and mature trees, where only a portion of the canopy was damaged, it’s likely there will be some bloom next year. These trees also should be pruned once new growth starts and whitewashed as needed. However, unlike with young trees, the reserves of these larger trees will result in a more rapid regrowth. If well-managed, this regrowth may bloom in spring 2019 depending on how quickly it develops. It will still be important to modify irrigation schedules to account for canopy loss to ensure these larger trees are not over-watered, but their greater size provides some buffering capacity and regular fertilization can resume once new growth starts. Keep in mind that we are still in the middle of summer and these trees have been severely stressed. It is probably best to reduce the duration of each irrigation set, but maintain the frequency of irrigations to avoid additional undue stress from drought that may occur if irrigation frequency is reduced.

The damaged tissue from this heatwave is going to provide a massive opportunity for avocado branch canker (Botryosphaeria and Colletotrichum fungi) pathogens to enter the trees. It is critical that the damaged branches be removed from the trees before the possibility of winter rains arrive. The damaged tissues are essentially open wounds in the trees. When we get rain, or even high moisture from heavy fog, the avocado branch canker pathogens will release their spores into the air, which will land on the damaged leaves and branches, forming latent infections. When conditions are right, those spores will germinate, and we will see severe cases of avocado branch canker. Thus, it is critical to begin the cleanup process now to prevent more severe damage down the road. 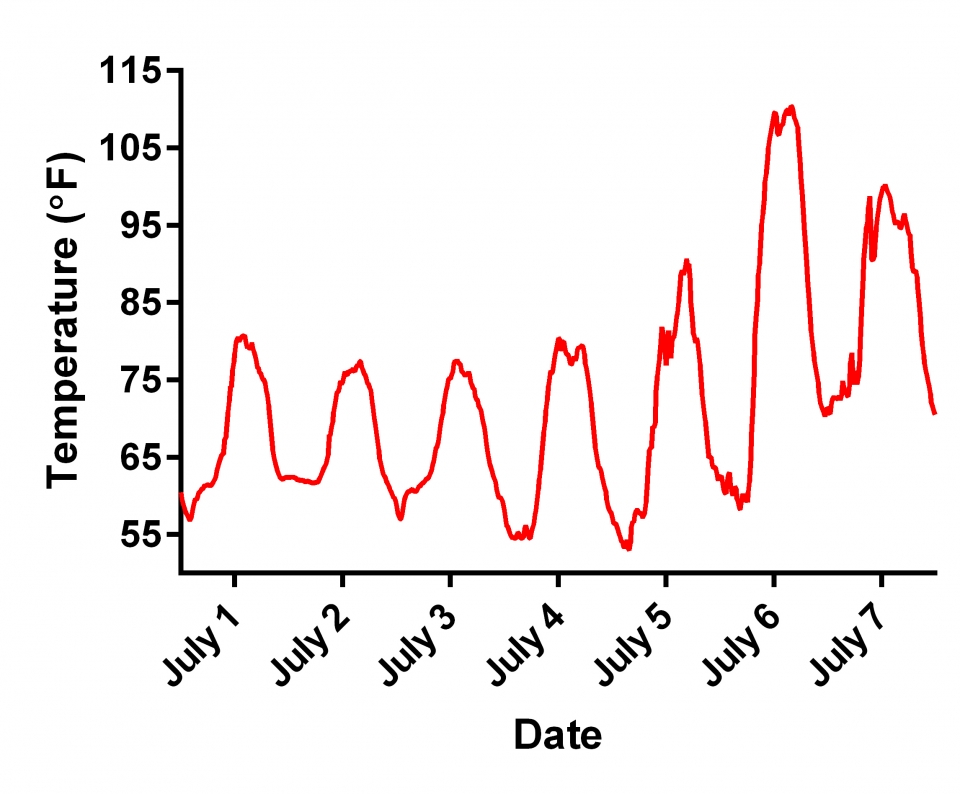 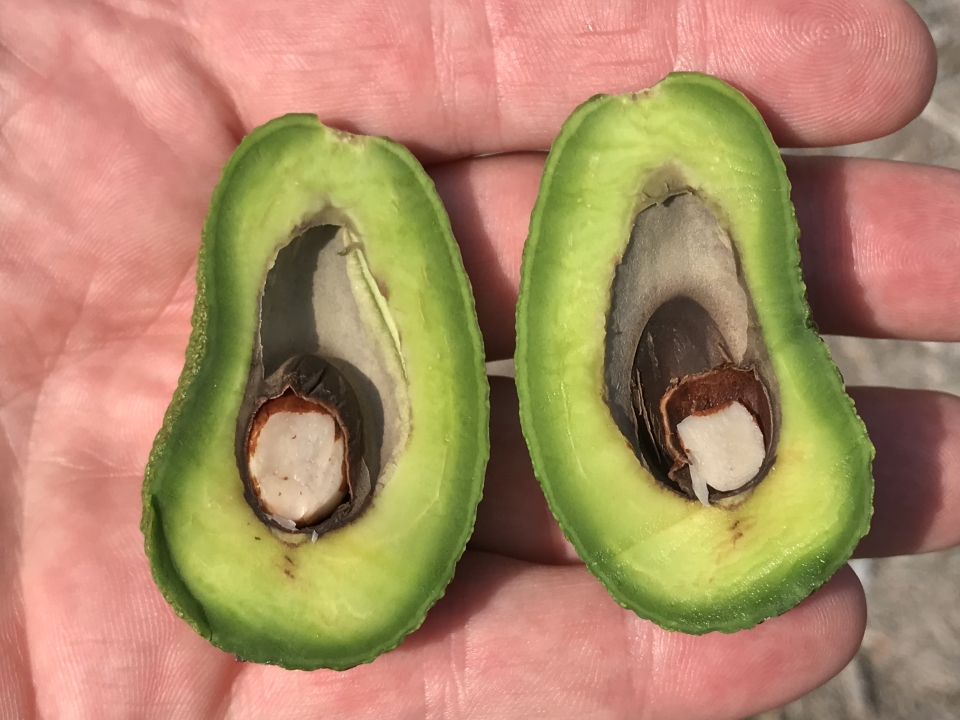 Young 2019-crop Hass avocado fruit damaged by the July 6 heatwave. The fruit flesh is soft and the developing seed has shriveled. 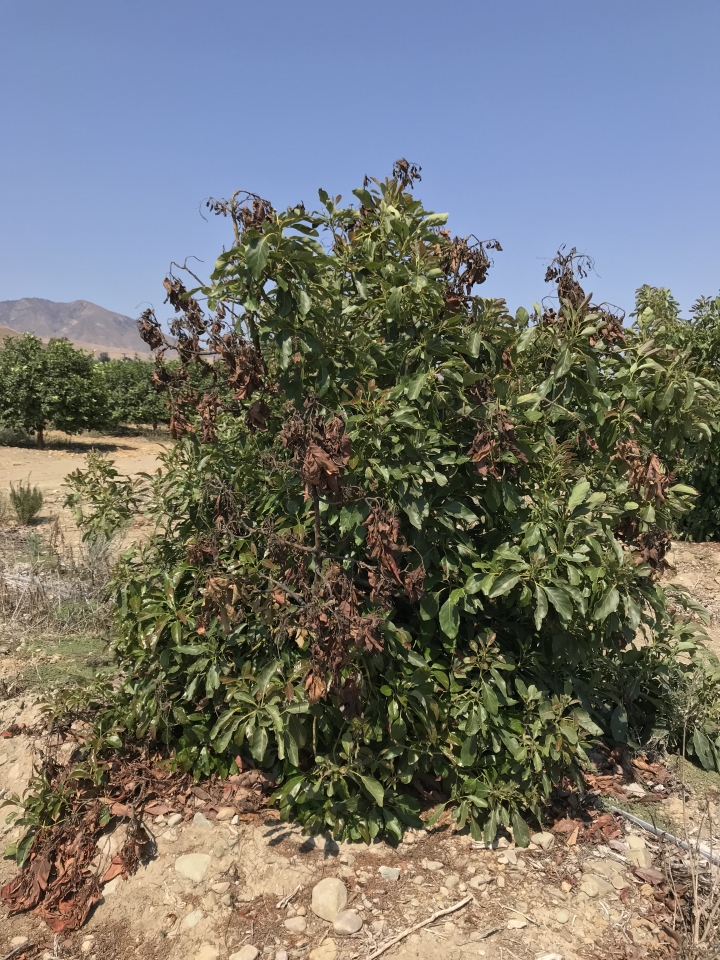 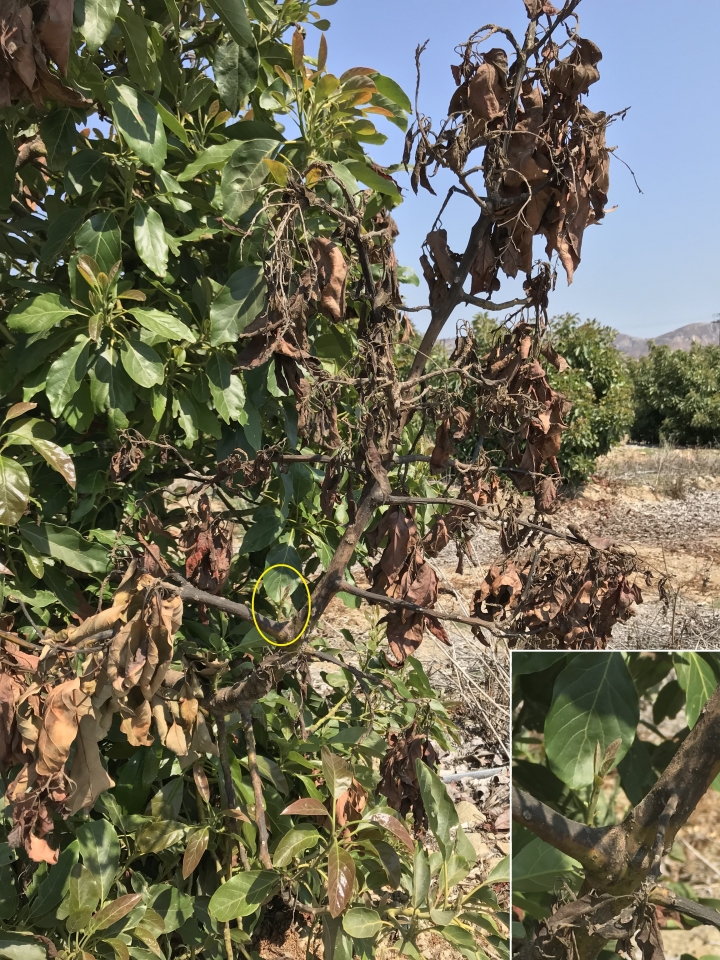 A heat damaged branch on a 4-year-old Hass tree, 35 days after the heatwave. The young shoot (yellow circle and inset) developing at the base of the damaged branch indicates where the living tissue is. This branch should be removed by pruning just above the new growing point. 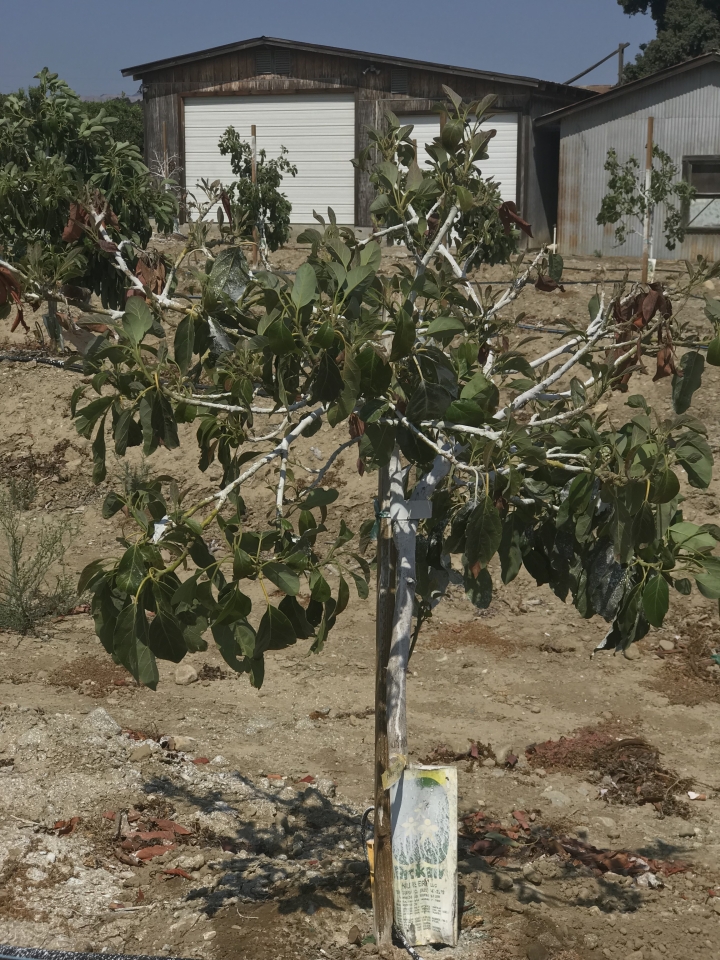 A young tree well whitewashed to protect exposed branches from sunburn. Note the relatively minor damage to this tree.

On Thursday, February 11, University of Florida researchers will host an online...